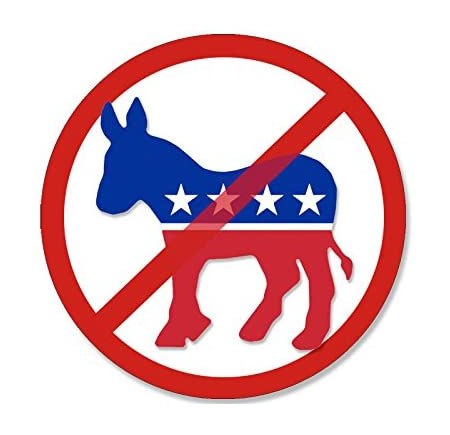 It was one sentence that probably flew right past everyone.

But for me, it was the essence of the entire ordeal. It spoke to the heart of why we are where we are, right now. It gave us insight into why platforms are censoring speech (and they are). It showed us why there is open hypocrisy in broad daylight and nobody seems to do anything about it or care anything about it.

And it mainly telegraphed why you should never – under any circumstances – vote for a Democrat.

Let me start by saying that I’m not a big fan of Republicans and/or Conservatives.

They are artless and non creative. Most of the time they are chasing culture instead of creating it. They’re great at middle management but not very adept at world changing (all of the data supports this). They tend to be behind the curve on issues and playing catchup on almost everything.

They will probably be pretty good at managing the fortune 500 company that builds the new, exciting device. But they won’t be the ones designing that device.

As an artist, I prefer hanging out with the designer of the device. The suits are not my jam. And the suits tend to be a at least a representation of Republicans/Conservatives.

Having said all that …

The reason they show up in the first place, is because the Democrat/Liberals are usually screwing things up so badly that somebody with a level head and steady hand has to come in and calm it all down.

There’s an old saying: the difference between Democrats and Republicans is…Democrats are serious.

And that is absolutely true. For Democrats, government is a force that must move forward and seize more and more power for the good of “the body politic.”

And so, where a Republican might hem and haw regarding a spending bill, and at least try to make the numbers make sense, a Democrat will usually (with some exceptions) complain that it doesn’t go far enough – even if it’s a spending bill that allocates ten percent of the entire world’s currency for 350 million people…like the one passed last night.

Whenever Democrats run everything, they always overreach. I’ve seen this happen time and time again. And I predict that in 2022, another House/Senate fruit basket turnover will happen…again…like it did in ’94 and ’10.

And Americans never seem to learn the lesson: don’t ever, ever, EVER vote for a Democrat.

It’s not because they’re bad people. In fact, a lot of them are wonderful people. But it’s because they have a world view that is embodied in that one sentence Mr. Cuomo uttered yesterday. And we seem to always have to learn over and over again, that “voting for the person, not the party” is kinda stupid.

Intelligence is knowing that a Democrat might actually make some good points. Wisdom is knowing to never vote for one.

The thing about holding your nose and voting for Republicans is that you know there are always going to be the wobbly ones like George W Bush and Mitt Romney, who will do plenty of social spending. You don’t even need Democrats around with Republicans like them.

And even though Republicans are usually on the right side when the issues are serious enough: Republicans ended slavery and a Republican signed the 18th and 9th amendments (one outa two ain’t bad). And a higher percentage of Republicans voted for the civil right act than did Democrats, (in fact, the Democrat filibuster of that bill is still the longest in American history), you know that the envelope will not get pushed. Government will move slowly and methodically…the way I like it to move.

Will you have to roll your eyes a lot and wince in embarrassment? Yep.

But you won’t wake up in crazy town.

My state is run by Republicans. It does nothing – NOT ONE THING – for families with special needs kids. I have never collected any sort of state assistance for my daughter, in 19 years. NOT. A. PENNY.

We also don’t have a state income tax. My property values are through the roof. My quality of life is amazing. And my family is more safe and protected than it would probably be in most states.

That is a trade-off I’m willing to make.

So, I watch them use tax payer money to make the Bible the official state book, instead of allocating funds for people like my daughter, and I grit my teeth and get on with my life…which is pretty damn good in this state (a Republican would ask me to change that to darn).

Meanwhile, Democrats would be all over allocating money for my daughter…and everybody else’s daughter…special needs or not…and then allocating money to stop calling them “daughters” but “sis gender people”…and then forcing the school systems to incorporate the language into every textbook (price be damned – or darned). And on and on it would go.

And we would have a state income tax in short order. And that would lead to a domino effect that the people of places like New York and California are living through as we speak.

And soon, the people who are pouring into this red state oasis, would be pouring back out…to another one, somewhere.

And if you don’t believe me, look around you. There is a school board rebellion taking place all around the nation. And it has everything to do with that pesky little sentence I talked about a the beginning.

For me, the sentence that spoke to why some people believe they have the right; no, the sacred duty, to mandate vaccines or masks or lockdowns or anything having to do with your own personal agency, was simple and pure and said all you ever need to hear:

If you believe that, then nothing the government does will bother you. If you embrace that idea, then of course you will grant grace to the “sophisticated” among us, as long as they are our betters and are leading us.

You’ll be all for censorship if it weeds out the “misinformation” not sanctioned by your God…the state. In fact, you’ll be for censorship of things that are actually true, as long as it protects your candidate.

I mean the ends justify the…well, you know.

If you believe government is the answer, Democrats always sound like a good idea.

But if you believe in the American theory that government should be representative, reasonable and restrained, you might end up shaking your head a lot.

You may have to put up with some ignorance and backward thinking from time to time. You may want to disavow your vote on occasion. There will be some eyebrows raised here and there.

But at least you’ll be dealing with people who believe the government isn’t and shouldn’t be the end all/be all of human endeavor. for the most part they’ll be about enforcing the contracts you make instead of them making them for you.

They’ll be about the government doing less…not more. And less is usually better. You can always get more if you need it. But it’s awfully hard to reduce it once it’s more.

And when you’re regretting that D vote in the last election, and racing to the polling booth to secretly vote for the embarrassing R, always keep that sentence in mind.

TO SUPPORT THIS BLOG, CLICK ONE OF THE LINKS BELOW:

4 thoughts on “WHY YOU SHOULD NEVER VOTE FOR A DEMOCRAT…”