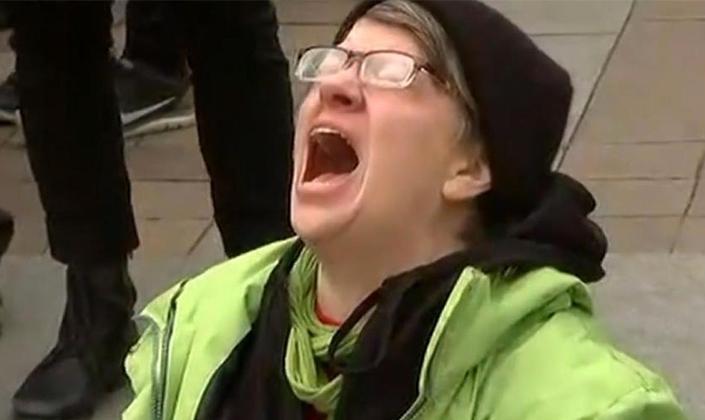 For two solid years, we have watched a protest or a march almost every weekend, in this country.

We’ve seen hashtag movements and we’ve heard celebrities lecture us. We’ve watched news journalists publicly melt down and we’ve seen former presidential candidates hurl insults and innuendos toward not just the current, sitting president, but the people who voted for him. We’ve read Facebook posts and tweets and Instagram memes, telling us we’re idiots if we believe this or that or if we don’t believe this or that. Yes …we’ve heard and we’ve seen.

So here’s the deal: we get it. All of this is duly noted. I would contend that all positions, on all sides, are understood. Got it.

Over the past few weeks, we have all heard – until we almost cannot hear anything else – how women have been treated through the years. It is a shame and something to be rectified. There is no doubt about that. And as someone who has always been a champion of women; a former first-grader who got pulverized on the playground once, for coming to the aid of a little girl getting made fun of; a former teenager who put his life in danger to stop an attempted rape, on a Greyhound bus to Kansas City; a current father of a daughter with special needs, who watches over her like a Buckingham Palace guard; I welcome the new conversation about how men should treat women. I welcome it with every fiber of my being.

But, in the welcoming of that, here’s what I’m not willing to do …

I’m not going to legitimize a claim that a man was a gang rapist in college, without a little more proof than, “I’m pretty sure I saw him standing by the punch bowl at one of the TEN gang rape parties I attended …AS. A. WOMAN,” without someone – ANYONE – backing up that claim.

I’m not going to legitimize the claim that “I think he waved his penis in my face …I THINK it was him. Although I was really drunk,” without someone – ANYONE – backing up that claim.

I’m not going to simply accept a “recovered memory” (which are proven to be flawed around 40% of the time) that a man tried to rape someone 36 years ago, when literally ZERO people who were supposed to be there, can even remember being there …much less corroborate an attempted rape claim.

Look, for me, this isn’t about not believing women and only believing men. I loved Bill Cosby. He was my TV dad. But Bill had too much verifiable evidence against him and he needs to rot in prison. And my heart goes out to all the women he hurt.

I don’t know if Brett Kavanaugh should be a supreme court justice. I don’t know him. I don’t love or hate him. He might be a piece of shit as a human being. But the notions and protests that have surfaced, in the wake of his confirmation, have pushed me, and I think millions of others, to the point of slamming our hands down and saying, “ENOUGH!”

It’s all duly noted. We hear you. Trust me …we hear you. But you officially asked us to stretch our suspension of disbelief too far.

Two days before the Ford letter was released to the public, I was working with a retired Army veteran, who was recounting his final years in the service. He was in charge of investigating military misconduct claims. Part of that job was investigating rape claims. His counterpart, in that particular duty, was a woman who did those specific investigations. There were plenty of those claims that were substantiated. Too many. But this woman occasionally uncovered rape claims, by military wives (who’s husbands had been on long deployments), that turned out to be false. Apparently, when you’re three months pregnant, and your husband has been gone for five months, some women decide rape is easier to explain than good, old fashioned infidelity.

So pardon me if I don’t believe ALL women …ALL the time. I’ve been lied to – by credible women – enough times, myself, to know that lying isn’t exclusive to men.

Denying that women cannot lie is denying them their basic humanity. It is, in and of itself, a form of sexism.

Now, men are coming out of the woodwork to apologize to women as a gender, and somehow try to make up for their own sins. John Mayer (who has screwed more actresses than Disney) stood on a stage this past week, and went into some convoluted diatribe about his own indiscretions and how sorry he was and how WE (yes …WE) as men, have some stuff we need to change.

Hey John …you made your choices, bro. Own ‘em and move on. Don’t drag me (and US) into your world. We don’t live in it. While you were balls deep in Jennifer Anniston, I was probably holding my daughter’s head, trying to keep her from choking to death on her own vomit, during a seizure. I don’t need or want any part of your pathetic cry for absolution. Most guys don’t. We’re not John Mayer. We’re raising kids and paying mortgages and trying to be good guys and decent husbands. If you want to stop being a womanizer …then stop. If you want to stop playing “Your Body Is A Wonderland” and using it to take advantage of doe-eyed starlets …we don’t create your set list …you do.

The good men of the world abhor attacks on women. We want to live in a world where there is no rape, no assault and no fear of us as men, by women. But much like racism, we will never be able to eradicate all of it …just by blindly believing people we don’t know. The Duke LaCrosse boys would have some thoughts on that. Every individual case has its own set of facts. And just because something happened to you as a woman, doesn’t mean Brett Kavanaugh did something to Christine Ford. Just like just because John Mayer gets booty calls from Jessica Simpson doesn’t mean I do.

We can teach our sons to be good men and we can police our own actions. But the protests and marches and screams and tweets, calling for the death of a supreme court justice, and being thankful that at least “we ruined his life,” and the constant drum beat of how “old white men” are inherently evil …well …all of that is simply getting old. And I, for one (as an aging white man), am starting to simply tune it all out. I’m starting to disengage from all women I come in contact with almost involuntarily.

And that’s a shame. Because there is a real conversation to be had, here. Unfortunately, we can’t hear each other over all the screaming.